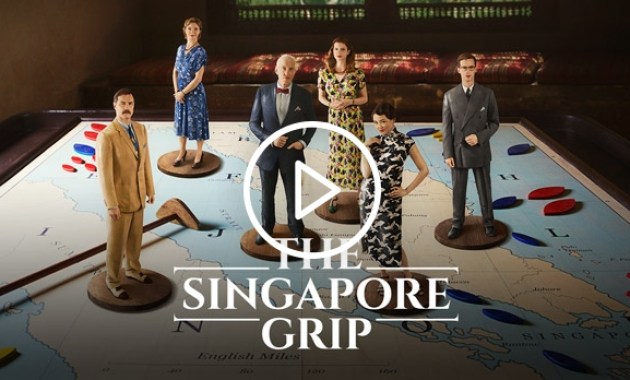 The Singapore Grip is British drama television series. its adaptatio of novel By J. G. Farrell. It was published in 1978, a year before his death.

The Singapore Grip is an ambitious and exotic family saga set in colonial Singapore during World War Two. this epic story centres on a wealthy British family living in Singapore at the time of the Japanese invasion. Rubber merchant Walter Blackett, his wife Sylvia, ruthless daughter Joan and spoilt son Monty live a life of luxury, seemingly untouched by the troubles in Europe. With Walter’s business partner Mr Webb’s health failing, Walter needs to ensure that the future of their firm is secure. He decides that Webb’s son Matthew is the perfect match for Joan, and Joan is happy to agree, but Matthew’s idealism leaves Walter increasingly suspicious as Matthew himself falls under the spell of Vera Chiang, a mysterious Chinese refugee.